The day had arrived! Would I have a smooth trip or would I get stranded in Firebaugh, cursed to spend the night at a motel that smells like the cow farm next-door? Let’s find out! 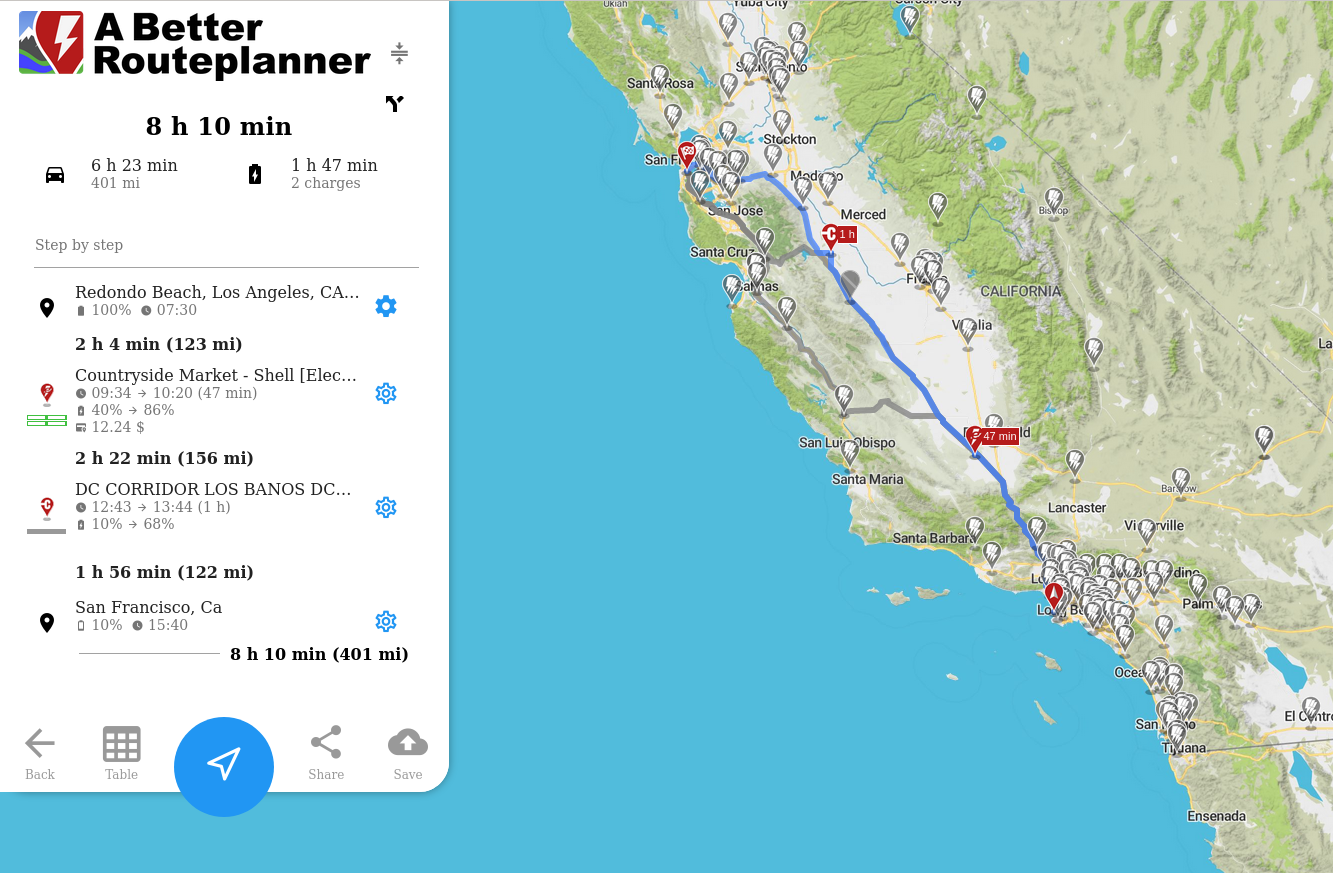 For details on the preparations for the trip, see my earlier post

Things went shockingly smoothly for a road-trip. I left LA at around 7am and arrived around 3:30pm in San Francisco, and some of that time was me stuck in gridlock 15 minutes into the journey because a huge car crash broke the 405 (seriously how is LA like this all the time?).

I stopped twice, once outside Bakersfield and again in Los Banos. Some trip stats:

Once I’d cleared LA traffic, the first leg of the trip went surprisingly well. I was worried that going through the mountainous grapevine would make the estimates of range inaccurate, but I arrived just 1 mile off from the Bolt’s estimate, which is pretty impressive. It was cool to get to the top of the pass and start the downhill leg, watching my battery charge up as I descended a few thousand feet over the course of a dozen miles.

The first charger was at a Shell station right off the highway. I parked in one of the three completely empty EV spots and started the fast charge. A quick bathroom and breakfast Taco Bell break later, and I was about halfway through the estimated 45 minute stop. From here I sat in the car and answered emails, trying to pretend I wasn’t skipping work for a road trip. Once the car hit 85% I stopped the charger and hit the road.

The second charger was a little more out of the way, located in a shopping center in Los Banos. Unlike the Shell, this charger was in the middle of a relatively dense commercial area. I started the charge and wandered off to try the new McDonald’s Chik-Fil-A knock-off. Pretty good, although the lack of sauces is a real point against ol’ Ronald.

After lunch, I swung by a grocery store to grab a couple of snacks and a drink, and by the time I was back at the car it had been an hour and the car was already charged enough for me to leave.

You’ll notice that the second stop was much more expensive than the first, even in cost per minute. I found that different chargers had very different pricing schemes. While still cheaper than gas, if you’re trying to save money you may want to shop around when you have options.

While it wasn’t the easiest road trip I’ve done, it was far less painful than I expected from an EV. With better charger coverage on the route, I probably would have been more comfortable with the margins and driven faster on the highway, but when you factor in things you’re already stopping for like meals it’s not adding that much more time to your trip.

That being said, if I was planning to road trip often I would probably prefer a long range Tesla, another EV with a higher rate of fast charge, or just rent an ICE car for those occasions. In different weather, this trip would have been especially painful as the climate control reduced range and required many more stops.

All in all, an easy and fun trip. Until next time!